When NBA teams elected to sit out Wednesday’s slate of playoff games in a player-led protest of the police shooting of Jacob Blake, it set off a chain reaction unlike anything ever seen in American sports. Within hours, several MLB and MLS teams, led by their players, decided to pause the night’s contests. The unprecedented stoppage stretched into a second day Thursday as more MLB teams postponed games. The WNBA, always at the forefront of sports activism, put a pause on their nascent season.

The goal was to take a real stand against the ongoing spate of police violence plaguing the country. But a second message became abundantly clear: Where the NBA’s biggest stars go, others will follow.
Why does it seem like professional basketball is always one step ahead when it comes to the social justice conversation? After all, the NFL has struggled for years to contend with the legacy sparked by Colin Kaepernick’s activism. MLB’s approaches to issues of race and justice have lacked coherence, and the NHL was slow to assert themselves in the most recent conversation. The WNBA and MLS, as progressive and influential as they are, cannot match the league’s power and influence.
Content by CNN Underscored
Learn a new language for less with these Rosetta Stone deals
Rosetta Stone has deals on one-year, two-year and even lifetime subscriptions so you can pick up a new language or two.
There are some key factors that help grease the wheels of the NBA’s ongoing activism. And it begins with some simple math. 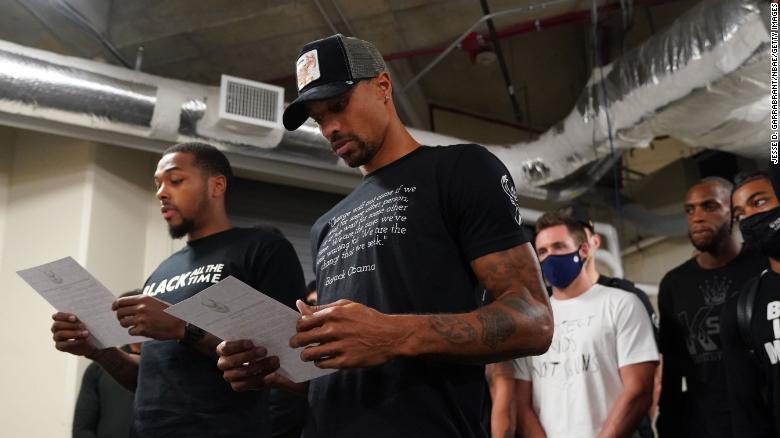 Sterling Brown and George Hill of the Milwaukee Bucks read a statement to the media on August 26.
It’s no secret the NBA has the highest percentage of Black players of any major sport in the US. In 2019, about 74% of players in the NBA identified as Black, and about 83% were people of color, according to data from The Institute for Diversity and Ethics in Sport. For comparison, about 59% of NFL players in 2019 identified as Black, and Black players made up only 8.4% of MLB Opening Day rosters in 2018.
This trend extends into leadership roles: At the beginning of July, 32% of the league’s general managers were Black. At the start of the 2019 season, 23% of head coaches were Black. Taken alone, these statistics are far from ideal in a league dominated by Black players. But they’re the highest among men’s professional leagues.
In all, it’s not hard to imagine that this diversity extends to the league’s fans and supporters. An analysis from FiveThirtyEight reveals NBA fans are also the most liberal-leaning of all major men’s sports fanbases. With such an audience, progressive messages of racial justice from players are much more likely to find a receptive ear.

Its players know their star power 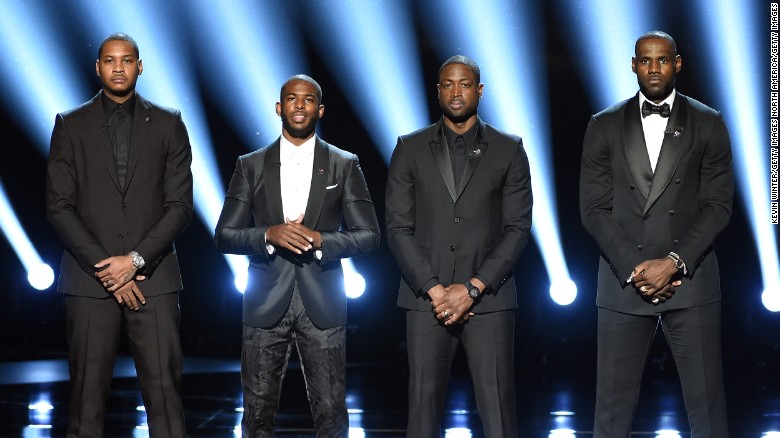 NBA players Carmelo Anthony, Chris Paul, Dwyane Wade and LeBron James speak about the need for athlete activism during the 2016 ESPYS.
In general, the NBA tends to put more focus on individual players than whole teams, a tenet that’s reflected in the culture and in the very structure of the league. “There are more individual stars in the NBA, and that stardom matters.” says Jamal Murphy, co-host of the Bill Rhoden On Sports podcast and reported for The Undefeated. “Those stars make more money, they can get their ideas out on social media, and what they say tends to carry more weight.”
While it wasn’t always this way, in recent years international basketball superstars like LeBron James and Chris Paul have set an agenda of racial justice among the sport’s most influential players. That influence is clearly on display now, and is likely to stay that way.
“Now, these players are showing they’re not afraid to even shut the sport down,” says Murphy. “They’ve actually seen what kind of power and influence they have, and we might see some of that trickle down into other leagues.”
Finally, don’t underestimate the power of a face. With close quarters, less players and no masks to hide their faces, it’s much easier to determine who’s who on a basketball court than it is in, say, a football huddle or a hidden baseball dugout. Believe it or not, that can make a difference in how we perceive single players versus a whole team of uniformed, faceless components.

Players get more support from on high 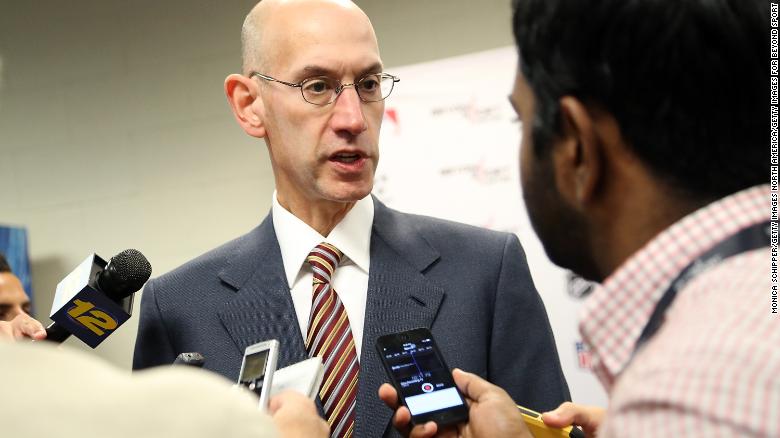 NBA Commissioner Adam Silver, who is credited with fostering a progressive environment in the league.
The last few years have seen a marked increase in social justice dialogue in professional sports, and it hasn’t been uncommon to see NBA coaches, owners and other league leaders speaking up to defend their players.
“NBA Commissioner Adam Silver and team ownership are a little more liberal and a little less staunchly conservative than other leagues,” says Murphy. (Again, “liberal” here should be considered in relation to other major sports organizations.) Silver has also taken a comparatively hardline stance against racism among the upper echelons of the sport and in the country at large, giving teams and players a path to follow suit.
Even the way players are paid and employed gives them an extra level of security when it comes to their personal beliefs.
“NBA players have guaranteed contracts, so they are inherently more financially stable and secure in their position than in the NFL, where you can get cut from one year to the next,” Murphy says.

A history of activism runs through the sport 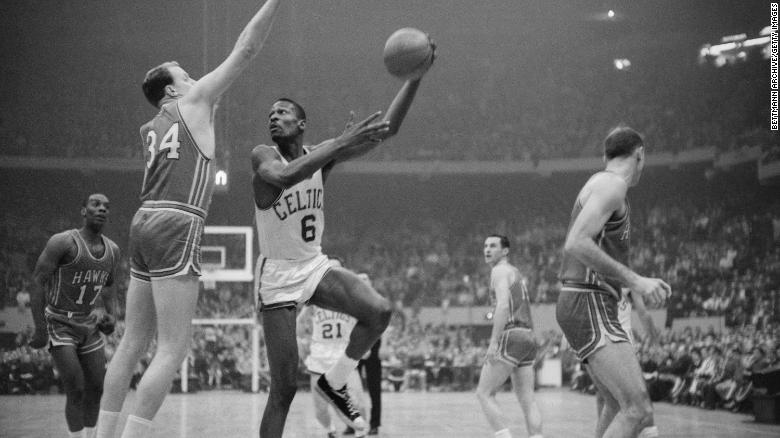 Boston Celtics player Bill Russell during a 1960 NBA Championship game against the Saint Louis Hawks.
While the recent pattern of unplayed games and player walkouts is unprecedented in its scale, several Black players wielded the power of protest during the Civil Rights era. Most notably, Boston Celtics player Bill Russell refused to play a preseason exhibition game in 1961 in Lexington, Kentucky, after he and two fellow Black players were refused service in their hotel. All in all, five Celtics players and two players from the opposing team, the St. Louis Hawks, skipped the game.
Russell, now 86, went on to become an all-time NBA great, breaking barriers for Black players and coaches and cementing himself as a powerful Civil Rights activist. He’s also voiced his support for recent player demonstrations, drawing a bold line from one era of deep social crisis to another.
“I’m moved by all the NBA players for standing up for what is right,” Russell tweeted. “Keep getting in good trouble.” 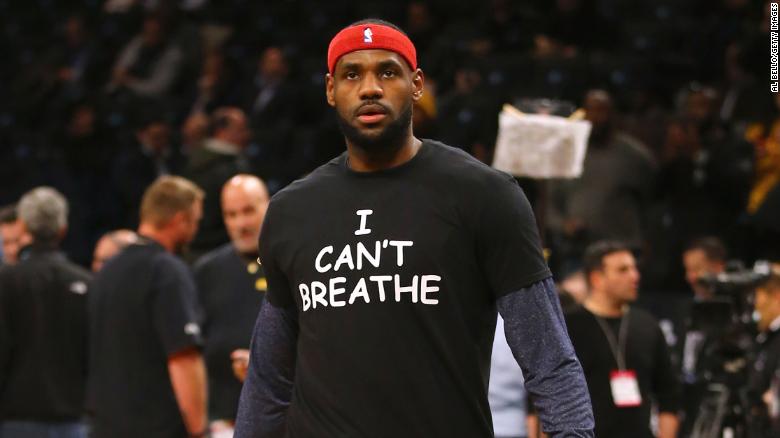 LeBron James wears an “I Can’t Breathe” shirt, invoking the last words of Eric Garner, before a game in 2014.
Recently, as the years-long controversy sparked by Colin Kaepernick’s NFL anthem demonstrations forced organizations to define the limits of their athletes’ political voices, NBA players and leaders doubled down on the league’s progressive stance. They’ve routinely gone toe-to-toe with President Trump, a frequent critic of athletes who display their progressive politics. They’ve positioned themselves as outspoken leaders following the murder of Trayvon Martin in 2012, the death of Eric Garner and others in 2014, the unrest following the 2016 election and the monumental Black Lives Matter movements that spread across the world this summer.
In the future, the new frontier of activism opened by these recent boycotts will likely continue. By threatening to withhold the very sport they represent, NBA players have made it clear how much is at stake in their calls for racial justice, and how much they will risk to have them heard.
via cnn https://www.cnn.com/2020/08/28/us/nba-boycott-protest-basketball-why-trnd/index.html

Report: At least three NBA teams will boycott Trump-brand hotels on the road

Just two NBA players out of 322 have tested positive for COVID-19 during quarantine inside ...
By Morgan W
September 10, 2020
WE THE CITY

With no coronavirus protection, the NBA will gamble on liability coverage in Disney’s bubble

The National Basketball Association will restart its season later this month with a league-wide general ...
By Morgan W
September 10, 2020