Via The New York Times By Marc Stein and Scott Cacciola

Many N.B.A. players say they have gone weeks without playing because they don’t have a basketball hoop at home and the pandemic has cut off their access to a gym.

When he kept getting the same downbeat message from various Miami Heat teammates about their long spell of inactivity, Jimmy Butler knew he had to do something.

Again and again, Butler said, he heard them lament: “I feel like I’m getting worse.”

Butler’s answer: He paid a company in Utah to send portable basketball hoops to roughly 30 players and coaches to ensure they had an outlet to at least get some shots up — even during a global health crisis.

“This is what we do,” Butler, an All-Star swingman, said in a telephone interview. “This is our coping mechanism. We shoot.”

In normal circumstances, yes. Modern N.B.A. players are accustomed to having an overwhelming array of resources at their disposal: state-of-the-art workout equipment and high-tech training software when they are not aiming $170 leather game balls at baskets galore in gleaming practice facilities. This has led many players, in recent years, to live as close to their team facilities as possible for easy, round-the-clock access, even if that meant opting for apartments or condominiums.

Then the coronavirus outbreak created a sudden need for at-home hoops because of the widespread closure of health clubs, community gyms and public parks on top of the N.B.A.’s mandate that all teams close their facilities. Numerous N.B.A. stars — including Milwaukee’s Giannis Antetokounmpo, Oklahoma City’s Chris Paul, Portland’s C.J. McCollum and, until recently, Boston’s Jayson Tatum — have said that they have gone weeks without shooting during what would normally be playoff time.

“Whoever thought times would get like this where you can’t even have access to a basket or a gym?” Butler said. “Nobody thought it would come to this. But it has.”

Jimmy Butler and Neymar: a Bromance Among Superstars 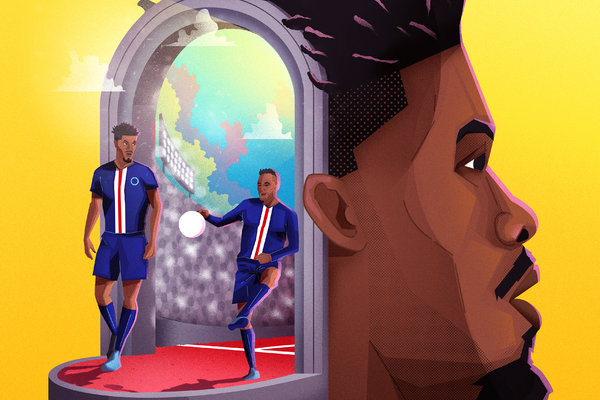 Meyers Leonard, one of Butler’s Miami teammates, said: “I can’t remember a time in my life, since probably the third grade, that I had gone this long without shooting a basketball. It’s been a weird feeling to not shoot, practice and compete. So it felt amazing to get a ball back in my hands and shooting.”

Danny Green of the Los Angeles Lakers, in a recent interview with Howard Beck of Bleacher Report on “The Full 48” podcast, said he adopted a drill from his youth to fill the void.

“As long as I’ve got a basketball, I can shoot at the air and keep a good feel for the ball,” Green said. “That’s what we used to do when we were younger: In the bed, lay on your back and shoot at the ceiling.” 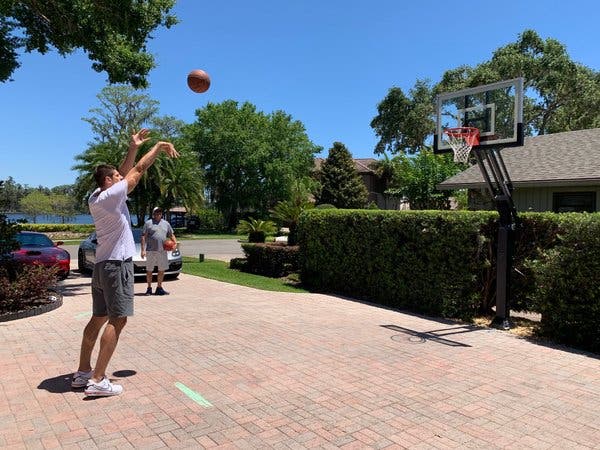 With the league’s shutdown approaching two months, The New York Times talked to numerous teams about their players being left hoop-less by the coronavirus crisis.

The Washington Wizards and the Dallas Mavericks said only two of their 17 players initially had access to a basket. Only two of the 16 Denver Nuggets players had a functional rim nearby. The Heat said they were also at 2 for 17 before Butler went on his shopping spree.

Pat Connaughton, a reserve guard for the Bucks, lives in a high-rise building and thus finds himself in a predicament similar to Antetokounmpo’s. He said in a recent telephone interview that he had not shot a basketball in about a month and a half.

He Is Building a Home. And a Career in the N.B.A. 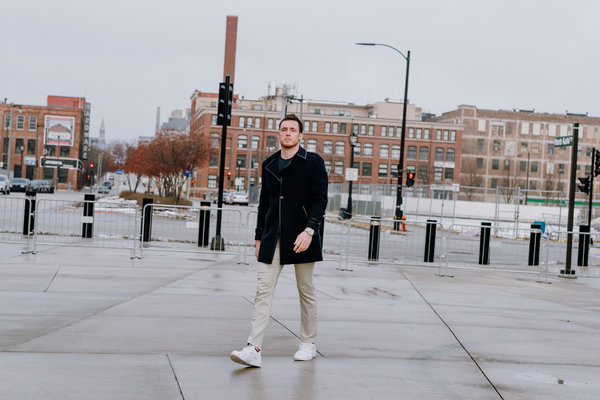 Even when Connaughton was playing minor league baseball for a summer while he was still in college, he would go out back and shoot hoops with his host family’s children. Alas, since the league suspended play on March 11, Connaughton has been limited to running hills, riding an exercise bike, lifting weights and dribbling around his two roommates, neither of whom is a professional athlete.

“I’m not sure it’s the same quality as N.B.A. defense,” Connaughton said, “but it’s something.”

There is a popular perception that N.B.A. stars have gyms and courts at home. Most pros do not regard shooting at an outdoor basket as suitable preparation for shooting at a regulation rim, but the misperception most likely stems from pop culture, especially the famed October 2003 episode of MTV’s “Cribs” in which Shaquille O’Neal opened the doors to his Orlando-area manse and revealed his own full-size court.

Sign up to receive an email when we publish a new story about the coronavirus outbreak.

“I think that was more of a thing back in the 1990s,” Orlando center Nikola Vucevic said by telephone.

Utah’s Mike Conley took advantage of a fancy Shaq-style home gym at his off-season residence in Columbus, Ohio, to win a recent H-O-R-S-E competition staged by the N.B.A. and ESPN, but Vucevic wasn’t so lucky.

Vucevic said he went about three weeks without being able to shoot until a neighbor installed an outdoor hoop and let him use it.

“It was so much fun because I haven’t done it in a while,” Vucevic said. “You obviously miss it, but until you actually do it again, you don’t realize how much. It’s kind of like when I was little and I would just go in front of my house and just play — for hours. It reminds me of that.”

In Orlando, nine Magic players said they had access to a hoop of some kind — more than on any of the 13 teams The Times spoke to.

The situation could not be more different in the Bay Area, a more congested region where only three of 14 players on the Golden State Warriors reported that they had been able to maintain some semblance of a shooting routine. Many of the Warriors’ younger players have been hampered by that space crunch, but Klay Thompson, one of the most feared 3-point marksmen on the planet, does not have a hoop to shoot on. Stephen Curry, Thompson’s “Splash Brother,” recently told The Wall Street Journal that he did not have a basket at home until his wife, Ayesha, ordered him one.

Jamal Crawford, the noted gym rat and 19-year N.B.A. veteran who had hoped, at age 40, to sign with a team this season, has been in Seattle trying to stay ready for a comeback.

“Luckily we had a hoop outside,” Crawford said. “It’s funny because we only had the hoop so my son could lower it and dunk on it. Ever since we’ve been quarantined, this hoop has been everything for us.”

Of his sessions with 9-year-old J.J., Crawford said, “Shooting outside isn’t to the level of shooting inside, but it gives some kind of peace of mind just to shoot at all.”

Crawford’s view helps explain the rising clamor among players to get back in those facilities — if only for the most basic of one-player-per-basket workouts that the N.B.A. plans to start allowing this month. The league recently announced that this Friday is the earliest that team facilities might open, and even then on a limited basis. Players would be cleared to use team facilities only in states where stay-at-home restrictions had been eased, and with a maximum of four players allowed in at any one time.

The league has forbidden players from playing basketball anywhere but at their homes since March 19. That directive was reiterated to teams in a confidential April 27 memorandum obtained by The Times, which said that players were to avoid public health clubs, fitness centers, gyms, college facilities or “the like.”

Yet one Western Conference player, who requested anonymity, said he was aware of some fellow players who had ignored league and government directives, arranging secret shooting sessions in unauthorized gyms.

League rules also prohibit teams from purchasing home baskets for their players, which moved Butler to alleviate that issue for the Heat. Home kits, though, come with their own complications: Gabe Vincent and Kyle Alexander, Miami’s two players on two-way contracts, both live in a hotel and had nowhere to unbox Butler’s present.

Then there’s an assembly issue. Leonard, who described himself as adept with tools, said it took six hours without the proper wrenches and with the limited equipment at his disposal.

Coming into the season, as Vucevic explained, most players would have thought: “Even if I had a hoop in front of the house, how much would I really use it in season?”

That, of course, was the old normal.

Via The New York Times – https://www.nytimes.com/2020/05/04/sports/basketball/coronavirus-nba-hoop.html

Via The New York Times By  Billy Witz If college athletes are permitted to cash ...
By admin
May 4, 2020